Bring Finesse to Your Grinding Jobs With the Best Cordless Grinders

By Woodsmith Review Team
Show contents
What is the Best Cordless Grinder of 2022?

When you are working on a construction or fabrication project, most of your time is spent in choosing the right power tools for the task at hand. There are so many of them - sanders, cutters, polishers, grinders, and several others. Out of all these, the angle grinder is used for various purposes, such as grinding, polishing, and also cutting through less durable and rigid objects. We have gathered all of the top cordless grinders in 2022 after careful consideration in this guide.

With so many different power tools scattered around on site, you also have to tiptoe and navigate around a sea of extension cords and wires, and there is always an electrical accident waiting to happen. Luckily, you don’t have to deal with these hazards, thanks to the invention of cordless grinders.

Cordless grinders are a type of angle grinder that is battery-powered, and they allow you to easily work in places where there is no power outlet nearby. Moreover, they can be used for DIY projects, or when you are on the go and need to grind or polish something quickly. Let’s have a look at all the cordless grinders that you can choose from.

What is the Best Cordless Grinder of 2022?

Our topmost pick is this angle cordless grinder tool, which comes with a powerful and high-performance 850 MWO brushless motor. Not only does it offer a quiet and smooth performance, but its brushless feature also eliminates the need for brush changes. The cordless design of the grinder allows for easy and convenient maneuvering in tight spaces and corners. Moreover, it has a kickback electronic brake that stops the wheel when it detects a pinch, stall or bind-up.

This cordless grinder is also equipped with e-switch protection, which keeps the grinder off in case of a power trip or power outage. Therefore, you will need to turn off and on the switch to restart it. 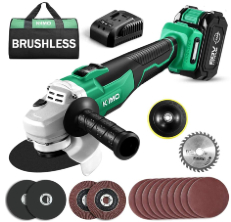 If you are looking for an option with the battery and charger included, consider the KIMO 20V angle cordless grinder. It is equipped with a 9000 RPM brushless motor that provides a smooth and quiet operation. Plus, it has a 4½” blade that can be used on both metal and wood. For safety purposes, this cordless grinder also features an electric brake that kicks in and stops the blade when it senses any problem or obstruction.

This cordless grinder is powered by the KIMO Li-ion battery, which makes it run much longer than others. Another great thing about it is that you get a complete tool kit, including sandpaper, metal cutting wheels, grinding wheels, wood cutting wheel, and several other accessories. 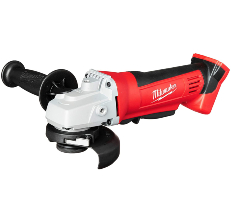 Our next pick is the Milwaukee 2680-20 M18 18V cordless grinder, which has a lightweight and durable plastic body with an ergonomic handle for improved control. It features a paddle switch design that makes it easier to control the power even when you are wearing gloves. Moreover, it is equipped with a 4-pole motor that offers a high amount of power and precision for grinding and cutting through various materials. Another interesting feature is the tool-free guard which you can easily adjust with the touch of a button.

This cordless grinder features an L-shaped molding beside the grinding wheel, which collects debris from the grinding job and prevents it from entering the motor. Plus, the overload protection keeps the power tool from overheating or getting damaged. 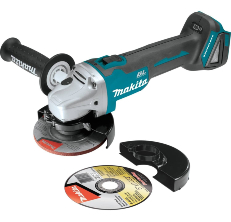 The Makita XAG04Z is made from a highly durable and impact-resistant polymer and contains a powerful brushless motor, which prevents overheating while working and also provides more working time. It is also equipped with Active Feedback-sensing Technology (AFT), which instantly shuts off the motor in case the wheel is externally halted or gets stuck. Moreover, the brushless motor is electronically controlled, which offers lower power consumption on battery power.

This cordless grinder has a compact handheld design with an ergonomic handle that you can grip properly when using it. It can be used to grind and cut through pipe, tile, concrete, and several others. 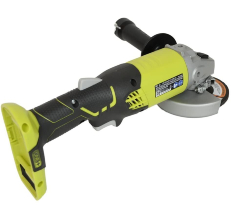 Our last pick from this list is the Ryobi ZRP421 ONE plus 18V 4½” angle cordless grinder, which has a lightweight and ergonomic construction. It has a powerful and smooth 6,500 RPM brushless motor that offers precision and speed. It also has a rubber-coated grip and side handle, which enhance the handling even better. Plus, the position of the side handle can be easily adjusted. The wrench is also attached to the grinder, and it can be used to replace the grinding attachment.

This cordless grinder works well and provides a superb performance with the 18V ONE+ battery. You can also use LITHIUM+ or lithium-ion batteries with it.

What is a cordless grinder?

As the name suggests, a cordless grinder refers to a battery-powered angle grinder that can be used portably for a wide range of grinding and cutting applications. They have a compact and handheld design with a comfortable ergonomic grip, as well as a side handle. This allows you to easily hold the grinder while you are working on different projects.

Cordless grinders are used in a wide range of industries, and they are highly versatile power tools. You may find them being used for metal fabrication, plumbing, construction, trade, DIY, and several other applications. They come with removable batteries and a battery charger, so you can even keep multiple batteries handy if you have to work on longer projects.

As battery technology continues to evolve and manufacturers come up with new technologies and mechanisms, cordless grinders are also being constantly upgraded and becoming better.

Why is a cordless grinder important for you?

First and foremost, a cordless grinder is used for several purposes and applications, as you may have read above. So, whether you are a fabrication professional, woodworker, plumber, or even a DIY enthusiast, this handy battery-powered tool is perfect for you. Since it works on battery power, you will find it easier to work anywhere you like, and also maneuver it in tight spaces and around corners.

Plus, the cordless grinder is lightweight and is relatively smaller than the corded variants, so you can easily handle and use it for some time without straining your wrists and fingers. Plus, you can easily carry them around with you on projects, and there is no power cord that you can snag or trip over in your workshop or at the site.

Also, a cordless grinder can prove to be quite versatile as well. Although its name suggests that it can simply be used for grinding, you can replace the attachments and use it to cut metal sheets and rods, finish metal, and also sand various materials with a sanding disc.

History of the cordless grinder

Angle grinders were invented and have been used since 1954, and it is believed that a German company called Ackermann + Schmitt created them. However, another story suggests that Thomas Joseph invented them in 1973. Over the years, the angle grinder was optimized and revolutionized for several purposes.

In the late 20th century, the cordless grinder was finally invented and launched, which allowed people to move around freely in the workshop as they are working. Over the next few decades, the design, functionality, and features of this power tool were made even better. However, there was a problem with the batteries heating up, and this was solved by power tool manufacturer Fein.

In 2015, Fein started adding a cooling material to batteries inside the cordless grinder, and this reduced the heat build-up inside it. Following this, several other features and a new Li-ion battery were also added to this powerful tool.

What factors to consider while choosing a cordless grinder?

When it comes to buying a cordless grinder, you can’t just buy the very first option you come across. You have to consider several different factors and variables so that you can choose the most suitable one to fulfill your requirements. Let’s have a look at them one by one.

Disc size is an important factor when you are considering buying a cordless grinder. Commonly, you can find options that come with 4½” or 5” blades, but there are also other options. The disc size also impacts the efficiency with which you can perform certain tasks. A rule of thumb is that the higher the disc size, the deeper the blade can cut through.

Speed is another key factor to consider. Most cordless grinders work at 10,000-12,000 RPM, which is sufficient for cutting through several different materials, including wood and metal. Plus, a speed like this allows you to finish the job much faster. Ideally, you should look for cordless grinders with variable speed settings, so that they can easily be used with several attachments.

Several cordless grinders have an electronic switch protection feature, which leaves the switch in the on position when there is a power outage or surge. Therefore, you will have to trigger the switch back to off and then on in order to start up the grinder again. This is a useful safety feature that prevents any harm.

Another useful feature to look out for is kickback protection. Kickback refers to the jerk the grinder experiences when an attachment gets jammed or pinched. It may also cause the cordless grinder to move towards the operator due to the high speed. To prevent the operator from getting injured, most cordless grinders have kickback protection, which shuts off the blade as soon as a pinch is detected. This is a highly useful feature that you should always look out for.

Usually, most cordless grinders come with electric brakes, which are applied automatically when you put down the power tool, as well as if you drop it accidentally. The brakes also kick in if the grinder snags or gets stuck against any clothes, which makes it highly useful and safe.

Q: How long will my cordless grinder last on battery power?

A: There is no standard battery timing provided by all batteries, and the timing differs according to how big the battery is, as well as how powerful the charger is. You can find out more about this through the manufacturer’s website or through the product reviews.

A: In some aspects, yes. However, when you consider working on larger projects and require more power, then you will have to rely on a corded one.

Q: Can cordless grinders be dangerous?

A: Since they are battery-powered and have a sharp blade on them, angle grinders can be quite dangerous, and they can injure your skin or eyes if you aren’t careful. Ideally, you should wear proper safety gear when using them. 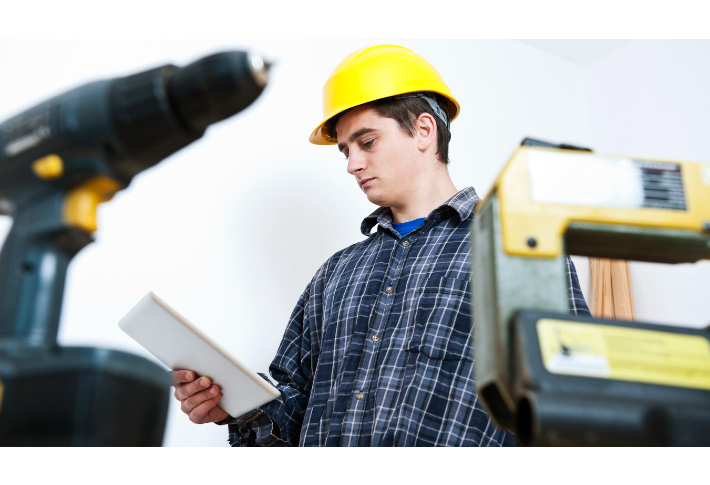 Precision in Cutting with the Best Portable Band Saw
As a professional, you need to be precise in your work to deliver the excellence and elegance required for each customer. Masonry, carpentry, and any other work that requires a… 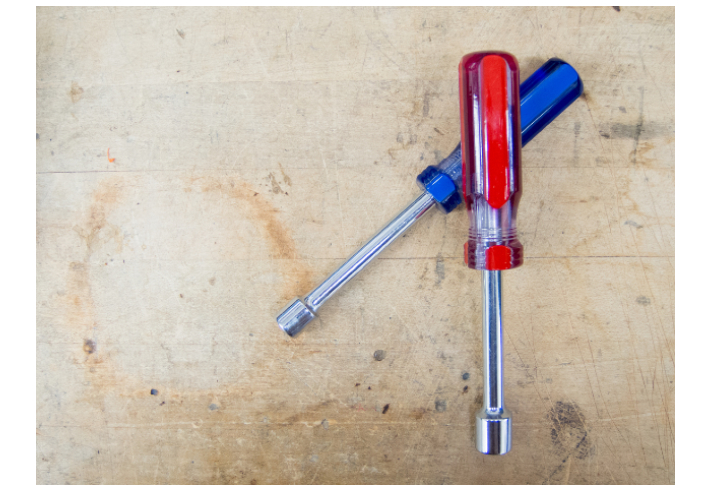 Tighten Nuts And Bolts With The Best Nut Drivers
A nut driver is a tool that needs to be present at home all the time. People often keep it in their toolbox as it is an essential tool for… 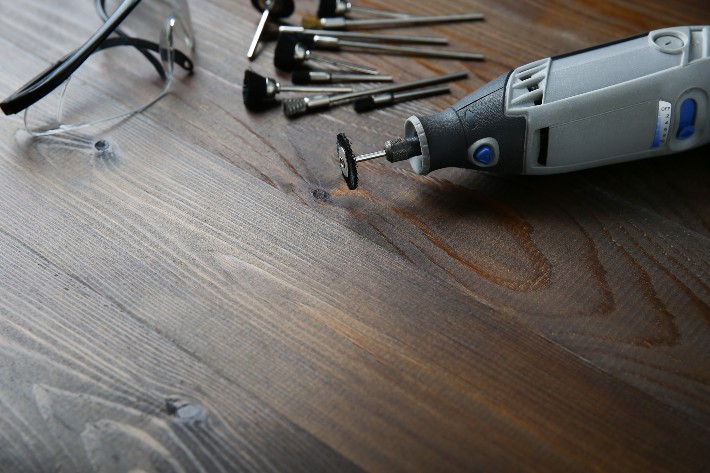 Cut, Engrave, and Polish With the Best Rotary Tools
Whether you are into the woodworking and fabrication trade, or like to do everything around the house on your own, a rotary tool is one of the best tools that…