Any mechanic, handyman, or do it yourself enthusiast should have a decent tap and die set in their toolbox. Given the numerous alternatives available, going out blind and looking for your best tap sets in 2021 might be a little daunting and unsettling. That’s why we have chosen to assist you by producing a list of five of the greatest taps and die sets now available for purchase in the market.

We hope that by providing you with this information, we will not only help you become a wiser and more informed consumer but also allow you to discover what you need more quickly and get back to work. 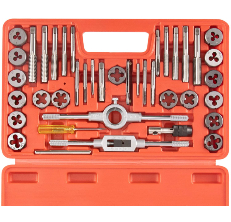 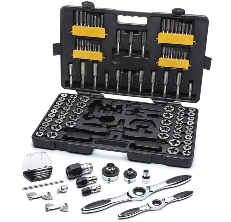 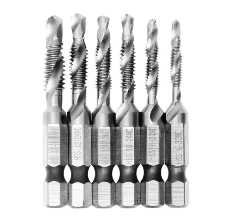 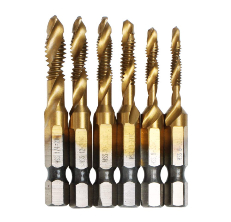 Though we've already gone through a few of the best tap and die sets on the market, there are still a few more to consider. We understand that every do-it-yourselfer values independence and that you want as much information as possible before making a decision. So that you may discover the exact set that meets your requirements. We'd like to use the next part to address a few basic issues and provide answers to a few frequent queries concerning tap and die sets that we believe every handyman should be aware of. Our goal, as always, is to make you a better buyer by giving you a better understanding of these items.

What Is a Tap Set?

It's only logical that we start with the most fundamental and fundamental of all questions before going on. After all, there may be some newcomers here who aren't sure what a tap and die set is or what it's supposed to do.

A tap and die set is a collection of instruments for making threads for bolts and nuts. The ratcheting wrench's goal is to make your work stress-free and more efficient. You may also use them to replace or repair existing threads on old screws or bolts.

The diameter, pitch, and hardness of taps and dies differ. Because the sizes of holes in metal sheets and bolts, as well as rods and nuts, vary, the diameter must vary. The type of threads produced is also affected by pitch. Depending on the sort of metal you're working with, different levels of hardness are also acceptable.

What Are the Types of Tap Sets?

There are a variety of taps and dies to choose from, and not every set includes all of them. Before deciding which set to buy, it's critical to understand which types you'll need, what each type can accomplish, and the strengths and weaknesses of each type. Here are some instances of various taps and dies.

Beginners should utilize these taps. They feature thin, flat threads and require only the tiniest amount of power to start, which is why they're commonly referred to as starter taps. With these, it's pretty simple to create a blind hole. You may use different taps to polish and improve threads that you started using a taper tap if you want to.

Since there are no flattened threads at the start of this type of tap, they can be counted on to help you thread your hole with high-quality thread all the way down. The disadvantage is that this feature makes bottoming taps considerably more difficult for beginners to handle. You may use them to complete threads that you started with a taper tap and work them until they're perfect with sufficient care.

Plug taps are designed to combine the benefits of both taper and bottoming taps. They start with a few flattened tapered threads, but not as many as taper taps do. This implies that starting with them is halfway between using a taper tape and utilizing a bottoming tap. Plug taps, on the other hand, offer one important benefit over taper taps: They're better for blind holes since they can produce full threads faster.

Circular dies are designed to produce a full thread in one step. They're also tapered, thus they're the die's version of taper taps. Beginners will find circular dies to be the easiest to operate.

These are ideal if you want to make a long thread, but they need a lengthy sequence of cutting operations, including closing the die after each thread. For novices, this makes them a little ungainly.

What Are the Factors to Consider Before Buying a Tap Set?

This appears to be a very easy topic to highlight, yet oddly enough, it's something that gets overlooked exactly because it's so clear. You want your tap and die set to be strong, long-lasting, and reliable. This implies that you should choose sets made of high-quality steel. Again, the specific level of quality you should aim for will be determined by your requirements. For example, if you wish to produce industrial-quality nuts and bolts, ordinary alloy steel would not suffice. If you're simply a regular person seeking to do some repairs in your garage, search for tap and die sets with components composed of high-carbon steel – or carbon, as it's commonly referred as. High-carbon steel is a hybrid of alloy steel and the more costly high-speed steel used in heavy industry. A high-carbon steel set will, however, be more expensive than a basic alloy steel set. Almost immediately, you'll notice the difference in quality.

This appears to be a very easy factor to highlight, yet oddly enough, it's something that gets overlooked exactly because it's so clear. You want your tap and die set to be strong, long-lasting, and reliable. This implies that you should choose sets made of high-quality steel. That means you should look at not just how many tools a particular tap and die set has, but also which tools it contains, depending on your needs and the kind of operations you want to accomplish. The price of a set and the number of components in it have a broad range of relationships. Alternatively, even though it has fewer components, it is of superior quality. Always be on the lookout for these things, and consider a variety of variables and features when selecting which set to purchase. Make sure you're not making a one-dimensional decision.

Aside from the number of parts in your tap and die set, you'll need to think about how they'll be used. More parts usually imply greater adaptability, however, the degree of this varies. To begin, look for sets that include taper, plug, and finishing taps. You'll also need circular and split circular dies, as well as die nuts.

What Are the Features to Look For in a Tap Set?

The Metric system, which is based on European measurements, or the SAE system, which is based on American sizes, can be used to denominate different sets. You won't be able to match your holes and threads to your nuts or bolts if your set isn't denominated correctly. If at all feasible, go for a set that can be used in both Metric and SAE measurements.

If you want to reduce the chances of future problems, ensure sure your tap and die set comes in a strong and dependable casing. After all, you'd like this to go on for as long as possible.

Wrenches are required in order to utilize your tap and die set. Wrenches come in a variety of shapes and sizes, but tap, die, and ratcheting tap and die wrenches are the most popular. The first two should be included in the most basic sets because they may be used to finish most jobs.

The kit contains a long-handled tap wrench, two T-handle tap wrenches, an adjustable die wrench, a 1/8″ flathead screwdriver, and a thread pitch gauge to address all of your needs. The tap ends are 1/5 to 2/5 in. in this SAE tap and die set, which is built to strict tolerances to satisfy professional demands. The length makes it simpler to utilize the wrenches that come with it. Everything you need to make accurate threads in wood or metal is included in the threading toolset.

Drilling, tapping, deburring, and countersinking are just a few of the activities that this drill tap bit set may help you with. The split point tip prevents wandering and enters the material more quickly. The power drill makes your life easier by saving you time and energy in addition to quick penetration. Taps may drill, tap and counter holes in wood, copper, brass, aluminum, sheet metal, and plastic, and are made of hardened high-speed steel rather than carbon steel for longer life. Each tap drill has a label etched on it that allows you to select the size that best matches your needs.

HSS 4341 is used to make Titanium Combination Drill taps, which ensures crisp, rapid execution while maintaining strength and efficiency. The drill’s surface has been coated with a titanium alloy, which improves the drill’s cutting capability, makes it more wear-resistant, and extends its service life. A three-in-one procedure offers hole piercing, striking, grinding, and knurling for a quick and thorough job on copper, brass, aluminum, sheet metal, and plastic. 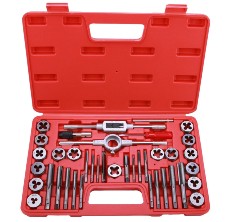 The EFFICERE 40-Piece Premium SAE Tap and Die Set are ideal for hand threading chores around the house, garage, and shop. It may be used to make new threads or to pinpoint old ones. This set is made of GCr15 impact steel, which can be cut through stainless steel, cast iron, alloy steels, aluminum, ceramic, copper, and other metal bars and cylinders. All slicing teeth are carefully CNC manufactured and thermally processed to Rockwell hardness 60 HRC for vigorous, smooth, and precise threading outcomes.

Q: What is the purpose of a tap and die set?

A: Tap and die sets are screw and bolt threading tools that allow you to make unique threads. Because of these, you never longer have to be worried about size incompatibilities. If the drilled hole is too small or the screw or nuts is too big, you have alternatives. This enables securing any type of building or furniture to the desired level considerably easily.

Q: When would I require the use of a tap and die set?

A: It's no secret that certain commercial items have thread holes, screws, and bolts that aren't up to par. In terms of the materials utilized, they might be too tiny, too thin, or too inexpensive. Without compromising internal structure, you may employ a tap and die set to create your bolts as big, strong, and lasting as you would like them to be.

Q: What is the optimal number of pieces for my tap and die set?

A: This would be determined by your requirements. For most families or inexperienced DIY enthusiasts, a tap and die set of at least 40 parts should be enough. It may be as high as 86 or more for experts. The range of occupations you can accomplish will be determined by the number of parts you have. This is usually only required when large-scale manufacturing is being carried out. 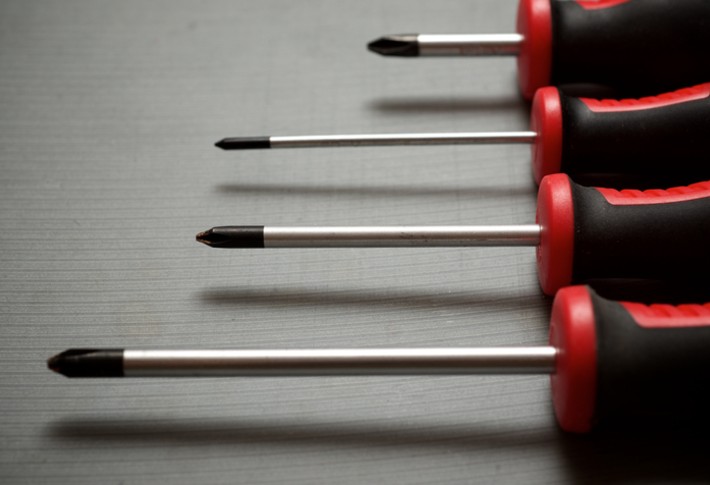 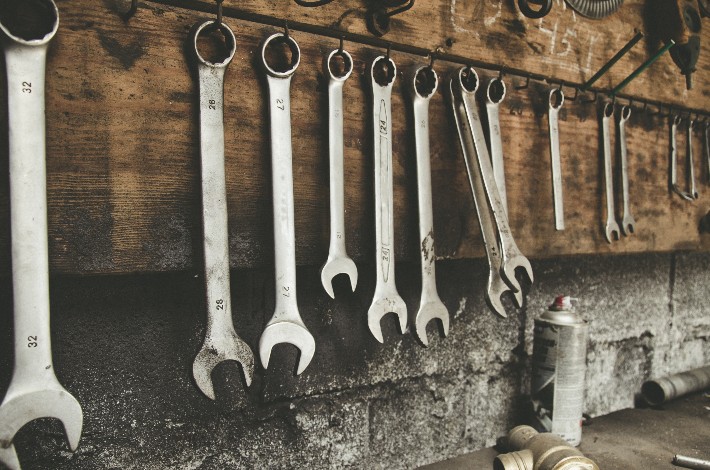 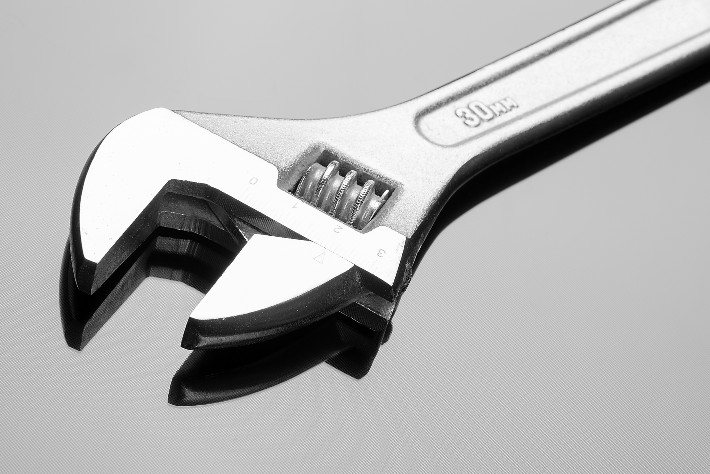