Seal, Coat, and Craft With the Best Epoxy

Epoxy is a common ingredient that’s used in more home products than you think. It’s an adhesive that, while sold on its own, can also be used in the manufacturing of various other substances. These include glues, paints, primers, and much more. Epoxy is an essential substance in many fields, and your life would probably be very different without it.

We’ll be discussing epoxy as a resin and a product. Epoxy resin is used in various ways, from making jewelry to simply coating substances. Here’s seven of the best epoxy resins in 2021 that you can buy online.

Epoxy is a popular product, but it isn’t something you can just use right off the shelf, unlike other adhesives. You’ll need to mix the resin with the hardener, use it before it hardens, and then wait for it to completely settle and cure. It’s a little more complex than your average adhesive, but its durability and effectiveness make up for the difference.

Want to seal holes, fix furniture, and mend broken appliances with ease? You’ll need to learn how to use epoxy first. Here’s what you need to learn about epoxy, as well as some tips to make the purchasing process a little easier.

Epoxy is a substance and adhesive that’s used in various products. These include paints, primers, glues, and the like. It’s typically clear, and when mixed with a hardener, becomes solid within an hour or less.

Why do you need Epoxy?

Epoxy’s useful for a couple of reasons.

If you’re working on an arts and crafts project, or you’re just putting things together, then paper glue or tape will probably be more than enough. And for stuff that requires a little heavy-duty work, duct tape will probably be sufficient. But if you really need something that can seal and hold reliably for years to come, then you’ll want epoxy.

Epoxy is incredibly powerful, and it’s used to seal boats, make furniture, and hold many other things in place. It’s a bit difficult to use at first, but its effectiveness makes the extra effort worth it in the end.

They can be used in a variety of situations

Epoxy has many uses. While some companies advertise epoxy as an adhesive, which it is, epoxy can also be used for many other things. It is used to coat and cover certain objects. It is also used in various art projects that need the clear and glossy nature of epoxy. It’s also useful for simply sealing holes. Even if you aren’t using epoxy 24/7, you’ll eventually end up in a situation where you could use epoxy to solve a problem. That’s how versatile epoxy is, and why you should at least have a bottle of one at home at all times.

Things to consider when buying Epoxy

Here’s what you need to remember the next time you buy epoxy.

Then you have other types of epoxy that are made for a specific purpose, and that purpose only. For example, there are epoxies that are mixed with other substances to make it stronger, but it doesn’t appear clear, which can be a problem for some people who need the clear nature of epoxy.

The amount of epoxy is also something you want to consider. Since epoxy only hardens when mixed together with the hardener, you don’t really need to worry about the substance hardening while you leave it on a shelf for long periods of time, however, there are still some things worth noting.

For example, do you have the space to store epoxy? Epoxy can be non-toxic, but if your pets consume it, they may get sick, so you’ll want to store it away from pets and children. Some epoxy products also produce a bit of smell, so you’ll want one that doesn’t have that sort of odor. Typically, you only need a bit of epoxy for quick fixing, so if that’s your intended use, then get a syringe or small bottle. Otherwise, you’ll have to get the large bottles, since epoxy is also used in large amounts for certain projects.

Depending on the formula, epoxies can vary greatly in price. Some epoxy syringes can go for as much as a large bottle of epoxy resin and hardener. This isn’t a scam, either - some epoxy products use higher-quality ingredients compared to others, and as such are better in certain aspects, such as bonding. You can expect to spend around $20 for your typical bottle or syringe.

How we choose the best Best Epoxy?

We choose our epoxy products based on their odor, color, intended use, and brand history.

Best Epoxies Worth Considering for 2021 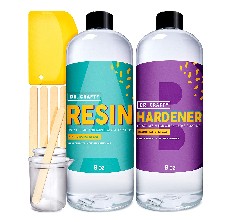 With a name like DR CRAFTY, you’d think that the epoxy resin kit was aimed towards artists. And it is – made to be easy to use and with all the included tools to get started, this kit is perfect for people who know that they need to use epoxy, but aren’t sure exactly how. The kit comes with various bits and bobs, but the main product includes the resin and the hardener – you mix even parts of both and you’ve got 45 minutes to work with it before it completely hardens.

The kit also comes with other tools to help you get started. These include five wooden sticks, two measuring cups, and a plastic spreader. You won’t have to prepare anything else for the epoxy since you’ve got all the tools you need right out of the box. 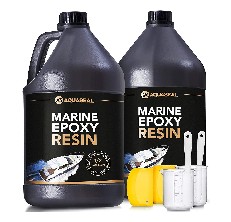 One of the more common uses of epoxy is as a sealing agent for boats and other complex construction builds. The seal can handle water, which is why it’s such a reliable tool for building boats. This particular epoxy resin is marketed towards boat-building and other building projects, hence the name “Aquaseal”.

The epoxy resin is also made to be ideal for construction projects. It’s even, doesn’t smell, strong, and clear, making it the perfect resin mixture for your DIY projects. There are also cups, stirrers, and spatulas included with your purchase so you can prepare the epoxy without any extra tools necessary. 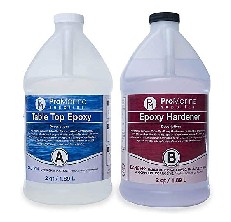 One of the trickier parts of applying epoxy is leveling the substance. The epoxy resin hardens after a while, and you want to make sure that the resin is evenly applied everywhere so that it looks good and is structurally sound. The problem is that if you’re new to working with epoxy, you’re bound to make some mistakes.

That’s where this epoxy resin comes in. Designed to be used by beginners, you won’t have to worry too much about leveling the substance before it dries, since it does that for you. It’s easy to mix too, with a 1:1 recipe that’s incredibly easy to follow along. If you don’t want to worry about messing up as much as possible, this is the resin for you. 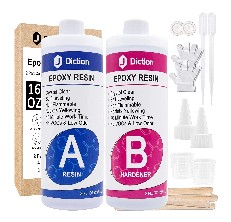 One issue some people have with cheaper epoxy resin is the fact that over time, it can turn yellow. This can be the result of various outside factors, and what was once a clear white finish can easily ruin the look of whatever has epoxy on it. To solve this, you’ll need to get an epoxy resin formula that’s made to resist the yellowing tendencies of epoxy.

This resin is made for just that purpose. Not only does it prevent any yellowing, which can save you a potential nightmare, but it’s also easy to use. It’s low-odor, meaning that you won’t be smelling too much while working with the substance. Finally, it’s also non-toxic, so you don’t have to worry about your health even if you inhale the epoxy fumes. 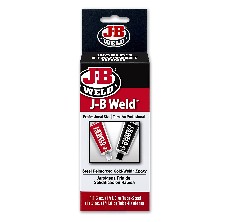 Epoxy is mainly used as an adhesive, and this epoxy is made to hold together even the toughest of materials. It’s steel-reinforced, and it claims to create a bond that’s stronger than steel. Unlike the other epoxy products shown earlier, it doesn’t come in large bottles – rather, it comes in two small squeezable containers.

The process of using this epoxy is similar to others – you just mix equal parts of both substances and apply the epoxy. It’ll take quite a bit of time before the epoxy settles – expect 4 to 6 hours before it’s perfectly settled. Finally, wait up to a day for the whole thing to cure. You’re then left with an incredibly strong bond that’ll be very difficult to break. 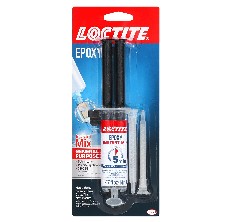 The previous epoxy product was tough and created really powerful bonds, but it had one downside – you had to mix the substances together manually before applying it. Now for some, this may be easy enough to do. But if you’re pressed for time or can’t be bothered to mix them manually, you probably want a faster, more efficient solution.

This epoxy product comes in a syringe. The syringe holds the resin and hardener in separate containers, and squeezing the syringe applies an even amount of both. The syringe also self-mixes the substances as they’re squeezed out, saving you the time and effort of mixing it yourself. It’s perfect for quick fixes that you don’t typically have time for. 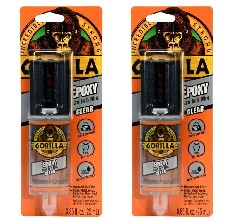 Gorilla is a well-known brand for adhesives and glue, and their 2-part epoxy syringe is a great testament to their quality. It comes in a syringe similar to the previous one, with two different substances stored in different containers. The substances mix and you get your furniture fixed and holes sealed. However, what really makes this product special is its setting time.

Epoxy takes a bit of time before it settles in and hardens. Gorilla epoxy settles in just five minutes, making it great for quick fixes. Five minutes is a bit short, but it gives you enough time to make the necessary adjustments before the epoxy hardens. The syringe also comes with a cap that lets you seal and reuse the syringe whenever you want to in the future.

A: Epoxy is a substance that’s used in a variety of products and is commonly used as an adhesive, though it can also be used in other ways.

A: Epoxy is generally non-toxic. This means you can inhale and even ingest epoxy without suffering from anything severe. 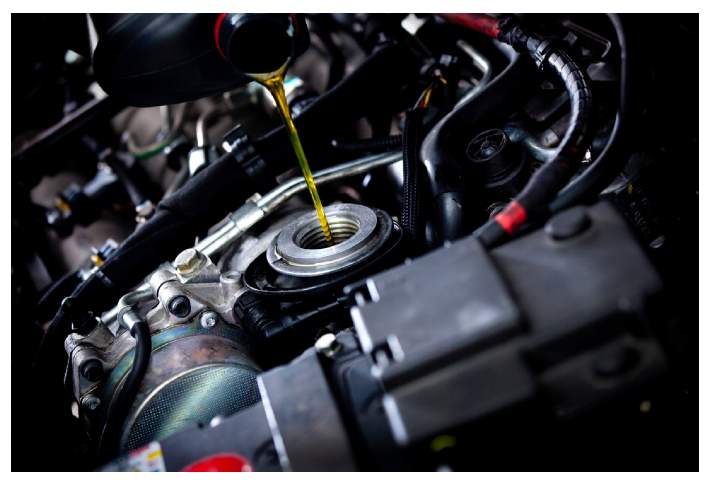 Keep Your Tools Running Smoothly With The Best Lubricant Oil 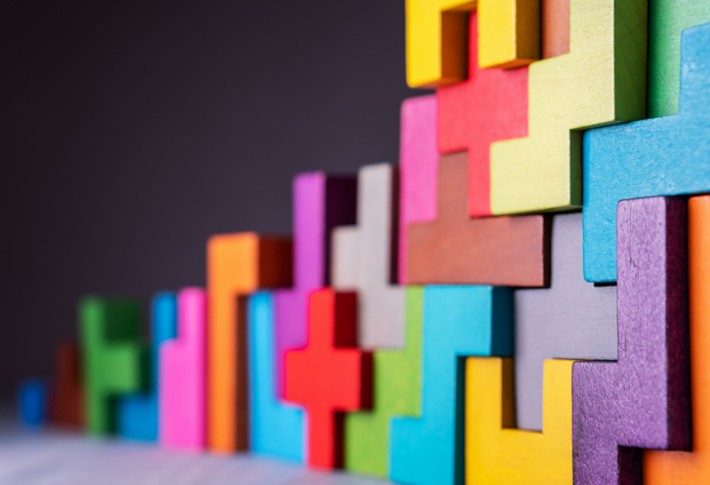 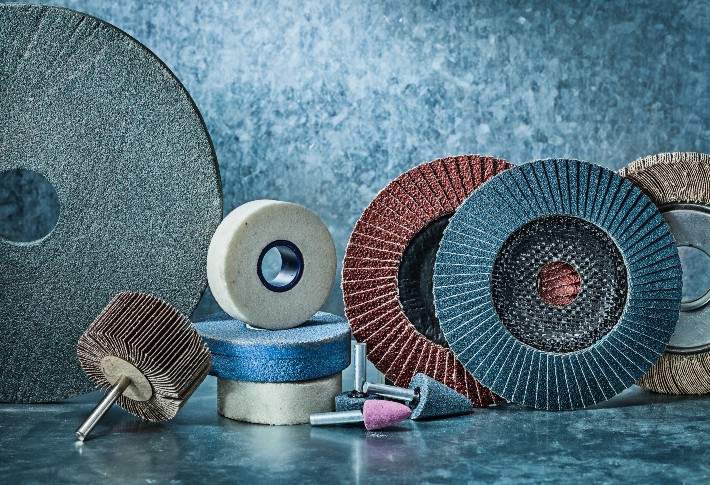 Smooth Out Your Work Using the Best Sanding Discs