By Woodsmith Review Team
Show contents
What are the premier miter saws of 2022?

Looking for a miter saws that will enable you to perform complex cutting jobs with ease? You’ve come to the right place! Here we run down some of the best miter saws in 2022, any one of which will make a useful addition to your workshop. Built to the most stringent standards of performance, safety, and ease of use, miter saws are some of the most durable and dependable power tools you could invest in.

Take the models featured below, for example. Constructed according to the highest standards, they utilize only the finest materials and assembly processes to ensure utmost reliability and safety even with rugged use. The quality of these miter saws is such that most any of them will represent an excellent deal. You simply can’t go wrong with any one of these, so choose the best miter saw at your preferred price point and find out what you’ve been missing out on all along.

What are the premier miter saws of 2022? 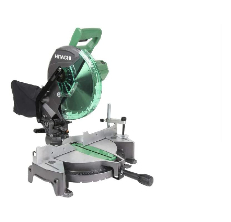 The Hitachi C10FCG is a lightweight, yet powerful compound miter saw. Its 15-amp motor is capable of 5,000 RPM no-load performance, making it more than capable of most crosscut and miter cut tasks. The C10FCG is equipped with a specially designed vice clamping system that keeps workpieces securely in place. This helps ensure safer and more efficient operation, with much less safety risk. A horizontal handle enhances secure fittings even further, and a dust collector attachment is included that reduces dust particles in the air.

The C10FCG is especially suited for making clean and precise bevel cuts. With its zero to 45-degree bevel range, it is an excellent choice for woodworkers that require utmost consistency and precision. It even has thumb-actuated positive stops that enable you to adjust miters quickly. The Hitachi C10FCG seems to appeal to beginners, many of whom were able to gain familiarity with miter saws fairly quickly. The simple and straightforward design of the unit is perfectly suited as a starting point to more complex work. 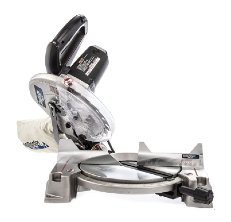 The Shopmaster S26-260L is a great addition to any woodworker’s arsenal of power tools. Boasting a host of useful features, it offers superb value in an affordable and capable design. Features such as the battery-operated laser make blade alignment a breeze, speeding up even the most complex tasks while ensuring accuracy. It also has plenty of power to spare, with a 15-amp motor that can cut smoothly and cleanly in a single pass. The Shopmaster S26-260L is quite a versatile unit that will work with almost any miter saw stand.

Those looking for excellent value in a miter saw have nothing but praise for the Shopmaster S26-260L, which features a powerful 15 amp motor that can easily cut through wood with great precision thanks to the battery-operated laser. Even users with considerable experience with other miter saws have shifted over to this one, citing its superb value for the money. Some users do mention the need to consider the size of the blade when making cuts. Many have found that careful selection of the blade is essential for getting the most out of this unit. 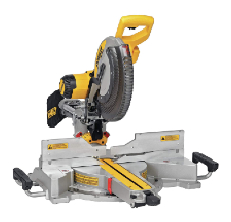 The Dewalt DWS780 combines a powerful 15-amp motor with a host of features to make cutting jobs easier and faster. It makes precise, smooth cuts with the 12-inch double bevel sliding design. The high-capacity cutting machine accommodates crown molding and base molding with equal ease. Like all Dewalt systems, the DWS780 is built for rugged durability.

Users of the Dewalt DWS780 are absolutely impressed with the accuracy and versatility of the unit. Many cite its ability to handle a wide range of board widths, with cuts that are as precise as could be. The Dewalt DWS780 also earns praise for its smooth and quiet operation, especially among those who have used other miter saws in the past. Features such as the XPS cross-cut positioning system enable you to perform accurate cuts without having to adjust the saw repeatedly, so even the most complex tasks can be done with ease.

A miter saw is only as effective as its reliability and durability. Choosing the best miter saw you can find will ensure that you get the best performance possible and that you are able to enjoy your tool to the fullest. A careful comparison will also ensure that you get a powerful tool that meets the highest safety standards. This is always an important concern, especially when it comes to miter saws, which may pose a safety hazard when improperly operated or constructed under less than optimal standards.

Evaluating the different types of miter saws is a much simpler task when you know what you are looking for. There are actually a few different types of these tools, each designed for specific tasks. Each type also has its benefits and drawbacks.

First up are the basic miter saws commonly used for trim cutting and cross and miter cuts. Because these designs typically don’t have a bevel option, they are pretty much limited to making miter cuts. Although they may not be the most versatile miter saws around, they are quite accurate and sufficiently effective for most basic cutting jobs.

Compound miter saws can be used to make tilted or bevel cuts due to the addition of a bevel. They can also be used for miter cuts simply by making a quick adjustment. These types of miter saws come in single bevel and dual bevel designs. Compound miter saws are most effective at cutting crown moldings and the like, performing even more complex jobs with ease and accuracy.

For sheer versatility, a sliding compound miter saw is what you need. This is by far the most versatile type of miter saw available and the most costly one as well. It provides all the benefits and features of a compound miter saw, with the added capability to cut wide and thick pieces of wood due to the inclusion of a sliding arm. Although overkill for most home woodworking jobs, the versatility and enhanced capabilities of these models make them pretty hard to beat.

There are a few important things to keep in mind when shopping for a miter saw. Some of these factors are intended to help you work faster and more efficiently, while others will reduce safety risk and prevent injury.

Power is typically measured in amps. The higher the amp rating of a miter saw, the more effective it will be at cutting. When considering this factor, you do have to determine just how much power you actually need. While a high amp saw is indeed nice to have around, it will also cost considerably more than a miter saw with fewer specs.

Another factor you will want to look into is blade size. Miter saws typically come with 8-, 10-, and 12-inch blades, although some can accommodate even larger blades. The larger the blade, the more effective it is at making long cuts.

Other factors that may be equally important to you are positive stops, depth stops, and articulated blade guards. These features enhance the effectiveness and accuracy of miter saws, enabling you to perform more precise cuts. You may also want to look into electric brakes that enable you to stop the blade’s spinning motion quickly.

What Are the Benefits of a Miter Saw?

Miter saws are some of the most useful tools to have in your shed or workshop. Among their benefits are:

Miter saws are known for their accuracy, which is why they are very popular among woodworkers and practitioners of fine carpentry. Saws that come with angle-locking features are even more accurate, ensuring that cuts are exactly the same angle every time.

Another thing miter saws are known for is their ability to make smooth cuts of the highest quality. This is especially true of compound miter saws, which are routinely used for tasks that require the finest quality results. With such saws, you never have to deal with rough edges that require a great deal of sanding later.

If you have ever wondered how experienced woodworkers are able to make so many differently-angled cuts, a miter saw is likely the answer. The best compound miter saws can even cut at various angles, even without stopping the motor.

Despite their ability to perform the most complex tasks, miter saws are surprisingly among the easiest power tools to use. Even if you have never handled a similar tool before, you could probably be performing accurate and complex cuts after a few trials runs.

They can save a great deal of time

Miter saws can make even the most difficult jobs go smoothly and more quickly. They are especially useful for making wide cuts in large pieces of material, which would otherwise take a long time to do with other types of saws.

If you want to learn more about what you can do with a miter saw, check out this video by Steve Ramsey on Youtube.

Q: What type of cuts can I make with a miter saw?

A: In most cases, the blade in a miter saw is mounted on a rotating arm that can pivot from 45° to 90° allowing it to produce straight and angled cuts.

A: The blade in the 12-inch miter saw is heavier, which is why it spins a lot slower. It's also more expensive than the 10-inch miter saw, which spins faster and is more portable due to its size and weight.

Q: Can I use a miter saw on the ground?

A: It's completely safe to use a miter saw on the floor as long as it has a solid surface. However, it can be a lot harder to cut this way, especially if you're working on a long sheet of wood that requires additional support while cutting. 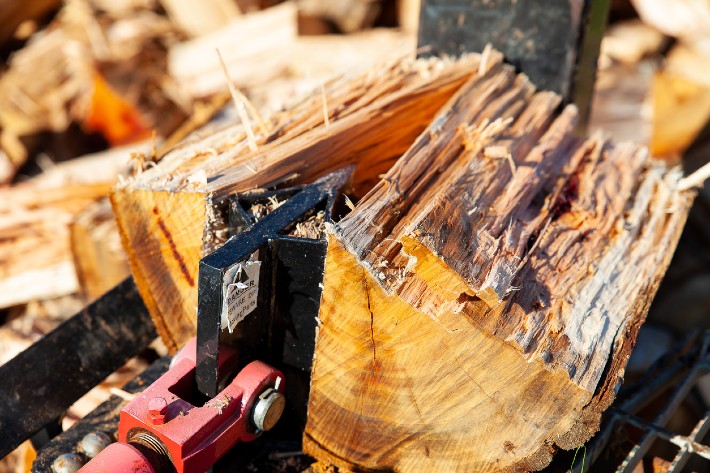 The Best Electric Log Splitter For Making Great Cuts
Log splitters come in several varieties, with differences in size, features, and price, making it tough for you to make a buying decision. Knowing how much power you want from… 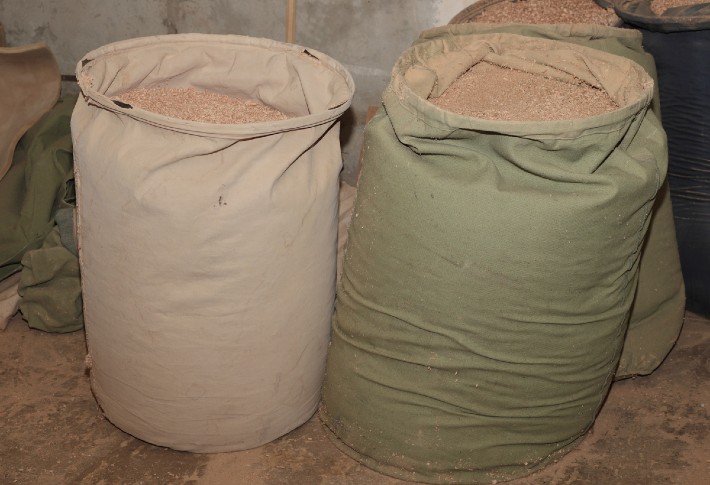 The Best Saw Dust Catchers for Shop Safety
Table saws, mitre saws, and hand saws are some of the most common machines that you can find in any workshop. Though they help a lot in easing your work,… 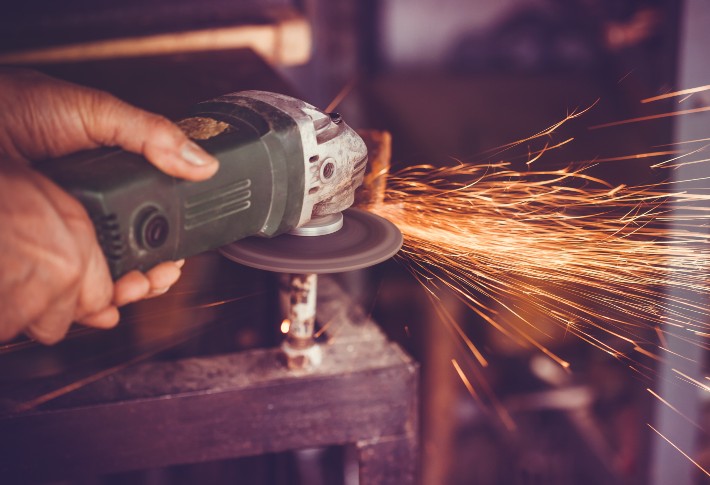 Cut, Grind, Polish, and Sharpen With the Best Angle Grinder
Whether you want to cut metals or grind concrete, grinders are handy, versatile power tools. You may opt between straight die grinders, angle grinders, and cut-off saws, which may be…