How To Find Metal Fasteners in Your Walls 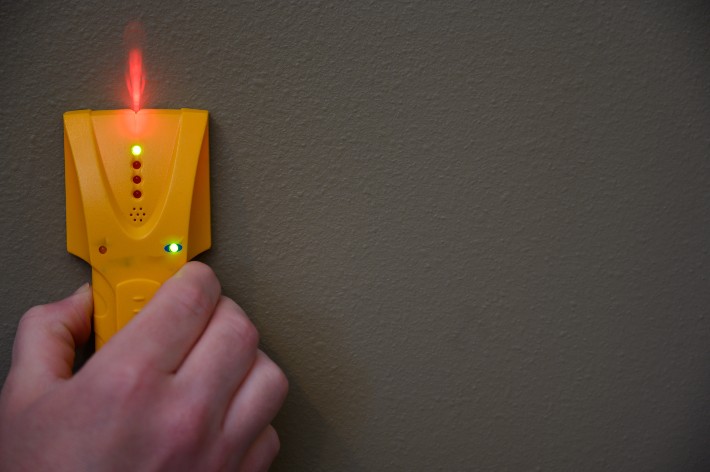 If you’ve ever attempted to hang something on your wall, you’ll know there’s nothing more frustrating than trying to locate the metal fasteners hidden behind the paint and drywall. While the conventional method demands poking holes throughout your precious wall, there are less uglier solutions. To help you out, we’ve compiled some handy tricks to locate the metal fasteners in a matter of minutes!

Here are four simple ways you can find that pesky metal fastener behind your wall before going berserk with hammer and nails:

1. Use a stud finder

If you don’t already carry a stud finder in your toolbox, there is no need to fret since they’re readily available in most hardware stores. Stud finders are magnetic or electric, doing more or less the same thing — finding a metal stud.

These finders can be used on both drywall and plaster walls. All you need to do is drag them over the wall and observe the magnetic attraction.

2. Use a powerful magnet

If you can’t get your hands on a stud finder, don’t worry; a powerful magnet can do a similar job. Use a refrigerator magnet or something stronger and drag it across your drywall. Wherever you feel that the magnet is sticking to the wall, viola, you’ve found your metal stud! Mark it with chalk and carry on with your handy work.

With the magnet method, you can avoid chipping off the paint at various spots or destroying your wall. If you don’t own a magnet strong enough to detect the metal studs, don’t lose hope since we still have a couple of tricks up our sleeve!

Another way to locate metal studs is by shining a bright light at your wall from an extremely shallow angle. This trick would allow you to see any bumps, mud joints and nails protruding out of your drywall and also help you locate the metal studs.

Unfortunately, if the wall is well-finished, it gets pretty hard to locate any humps on the wall, and you would need to resort to a different method.

4. Use your electric switches

Since most electrical switches are attached to the side of a metal stud, all you need to do is locate which side of the stud they are on. You can do this by tapping each side of your electric socket with a finger, and you’ll find the metal stud where the pitch of your tap is the highest.

Once you find your metal stud’s side, you can pull out a 16-inch or 20-inch layout, find all the other metal studs behind the wall, and mark them with chalk.

If you can’t find the metal stud direction with the tapping method, you can take your switch plate off and find the nail which attached the electric box to the stud. The nail is usually slanted back into the stud, allowing you to determine which side the stud is on.

We hope the tips we’ve listed above help you locate the metal fasteners in your wall without feeling the need to poke around. Happy searching!