Enhance Your Woodworking With the Best Benchtop Thickness Planers

A planer is a handy and reliable woodworking power tool that is used by professionals to bring a more refined finish to their projects. It is generally used to smoothen and level the surfaces of different pieces of wood that have to be joined together, or to bring them to a uniform thickness. You can find many different kinds of planers for this purpose, but nothing comes close to a benchtop thickness planer.

The Best Benchtop Thickness Planer of 2022 in Detail 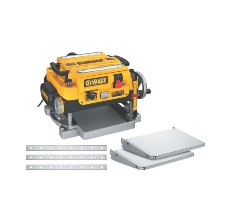 The DEWALT Thickness Planer has a powerful 15 amp motor and a two-speed gearbox that runs at 20000 RPM and lets you alternate the cutting speed between 96 and 179 cuts per inch. It has a 19¾” cast aluminum base that is much more durable and wider than other planers. Plus, this benchtop thickness planer also includes a three knife cutter head that lasts much longer and is also easier to change. It comes with a material removal gauge and thickness scale that help you achieve precision and accuracy.

This benchtop thickness planer also comes with an in/out feed table and fasteners, as well as extra blades and a dust hose adapter that works well with the chip ejection system. 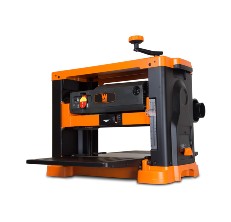 The WEN PL1326 Benchtop Thickness Planer is equipped with a 15 amp motor that delivers a speed of 10000 RPM and a cutting rate of 26 feet per minute. It has a sturdy and advanced benchtop design with a cast iron base that ensures durability and a longer life. The planer sits level on any surface, and its plane can accommodate workpieces up to 6” thick and 13” wide. It has a spiral cutterhead that makes use of 26 rotatable cutting blades for clean and precise material removal.

This benchtop thickness planer features a material removal gauge that indicates the cutting depth after each pass. It also comes with a depth stop and an adjustable dust port.

The CRAFTSMAN Benchtop Planer features a powerful 15 amp motor that delivers 8000 RPM and enables you to make up to 16000 cuts per minute with its high-quality Poly-V cutter head. Its cutter head is fitted with ball bearings, which ensures a smooth operation and precise performance. It has a highly durable cast iron construction with a sturdy base that keeps it from wobbling or moving while you are using it to level different pieces of wood. The planer makes use of double-edged and reversible knives to remove soft and hard materials.

This benchtop thickness planer has a protected on/off switch, as well as a vacuum port that allows you to collect dust easily without creating a mess. 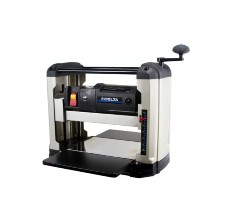 The Delta Power Tools 22-555 Portable Thickness Planer is a heavy-duty machine that allows you to work on different surfaces with smoothness and precision. It has a powerful 15 amp motor that delivers a speed of 18800 cuts per minute. It has a durable four column design and two polyurethane feed rollers that contribute in providing a feed rate of 28 feet per minute. It is also equipped with two double-edged and reversible knives that cut through harder materials as well. The plane can accommodate workpieces with a width up to 13” and height up to 6”.

This benchtop thickness planer features top-quality in/out rollers made from nitrile synthetic rubber, which allows you to work with longer workpieces. 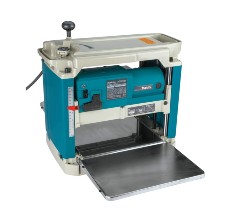 The Makita 2012NB Portable Planer is a compact and lightweight machine that allows you to easily level and smoothen various surfaces. It has a four-post design with diagonal cross supports that keep the planer stable. It features a 15 amp motor that has a no-load speed of 8500 RPM and a feed rate of 28 feet per minute. Plus, it also has an adjustable cutting depth setting that helps you achieve a maximum thickness of 6.09”. The planer removes material with the help of disposable double-edged blades, which can be easily removed as well.

This benchtop thickness planer also comes with large table extensions to support longer workpieces. It has a paddle switch that you can easily turn the planer on and off with.

What is a benchtop thickness planer?

A benchtop thickness planer is a powerful machine that enables you to ensure similar thickness and smoothness on the workpieces that you are using in a woodworking project. As the name suggests, this type of planer is placed on a bench and it usually has a sturdy base that keeps it from wobbling or moving due to vibration.

Generally, benchtop thickness planers have a loud operation, which is why it is wise to find one that has a lower noise rating, or have a pair of earmuffs handy whenever you are going to use it. Not only are they highly useful and convenient to use, but they can be easily used by people of all skill levels, including beginners.

Why do you need a benchtop thickness planer?

A benchtop thickness planer is a value-added power tool that is suitable for woodworkers and carpenters. Moreover, people who work on DIY projects can also make use of it to level their workpieces and add more finesse to their projects. Usually, you have to join various pieces of wood together to create a level and smooth surface, and the benchtop thickness planer helps you achieve this much faster.

Apart from this, you can also achieve the desired thickness on all of the wood pieces if you have a benchtop thickness planer, which allows you to set the cutting depth. Moreover, most models also come with a feature that indicates when the desired thickness has reached so that you don’t perform any more passes with the workpieces.

Last but not least, a benchtop thickness planer is lightweight and compact as compared to an industrial planer, which also makes it easier for you to transport it when needed. Despite its compact size, you can still use it to trim and smoothen longer workpieces easily.

How to use a benchtop thickness planer?

The benchtop thickness planer requires a bit of training and learning in the beginning, but once you have mastered it, you won’t have any trouble in using it for achieving consistent levels of thickness in all your woodworking projects. Before you begin, make sure to wear safety goggles and gloves, and also put on a mask to protect yourself from the flying dust.

Assuming that you have already chosen the pieces of wood that you will be working with, there are a few things you need to do before starting the benchtop thickness planer. Firstly, you will set the thickness that you want by using the depth adjustment feature present on the planer. If there are any additional trays or other accessories with the planer, make sure to fit them also.

Next, place the workpiece on the plate but keep it away from the cutter head. Now, you can turn on the machine and slowly guide the workpiece towards the knives. A gentle push would keep the workpiece going towards the cutter, and it will come out on the other end, where you can grab it and put it in the machine once again if the thickness hasn’t been achieved yet. This will be indicated by the material removal gauge that is present in nearly all models. This step will be repeated until the planer indicates that the workpiece has the right thickness.

Things to consider before buying a benchtop thickness planer

Before you buy a benchtop thickness planer, you need to ensure that you have made the right choice, and we have listed down a couple of factors that you can apply to each model that you consider. Let’s have a look at these factors one by one.

The power and speed of the benchtop thickness planer is dependent on the motor it is equipped with. Having a more powerful motor allows you to easily work with larger and harder materials, and also cuts down on the planing time. Most models come with a 15 amp motor, which is sufficient for most projects. Make sure to examine the horsepower and amperage of the motor in whichever planer you look at.

The speed of the benchtop thickness planer is one of the most important considerations and it is measured in both cuts per inch and revolutions per minute. This indicates how many cuts will be dealt on a workpiece per inch. The higher this value will be, the smoother the performance of the planer. Revolutions per minute, or RPM, refers to how fast the blades will rotate, and this should also be higher to make work smoother.

The knife is a crucial component of a benchtop thickness planer, and most models feature one or two of them. Some planers also come with reversible knives that can be easily flipped when one side becomes blunt due to overuse. Ideally, you should get a benchtop thickness planer with two or three knives, so that they cut through different materials quickly and with more ease.

When the motor of the benchtop thickness planer rotates the cutter head at a high speed and you start guiding wood into it, the removal of material will cause sawdust to fly, which is why the planer you choose should have a dust extraction or collection system in it.

Q: Can a benchtop thickness planer be used to flatten wood?

A: If a workpiece is warped or curved, it can’t be straightened or flattened with the help of a benchtop thickness planer.

Q: How do I avoid tearing out the grain while using the planer?

A: Grain tear out occurs when you use the benchtop thickness planer in an opposite direction to the grain of the wood. All you need to do is to ensure that the grain is aligned with the direction in which the blade spins.

Q: How do I prevent sniping with the planer?

A: Sniping refers to the planer shaving off the end of the workpiece, and to prevent this, run a piece of scrap wood through the planer a few times before you start putting in your workpieces. 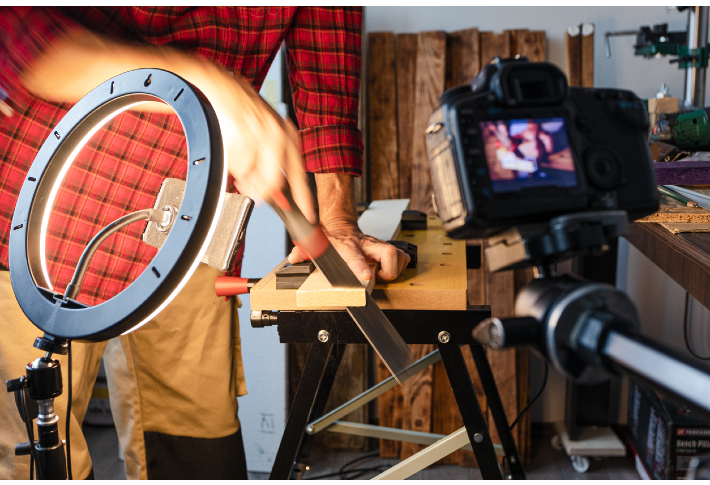 Improve Your Cutting Efficiency Easily With the Best Mobile Sawing Tables
If you’re looking to improve your efficiency with every cut you make, a saw table is the best tool to use. Not only does it make you way more efficient,… 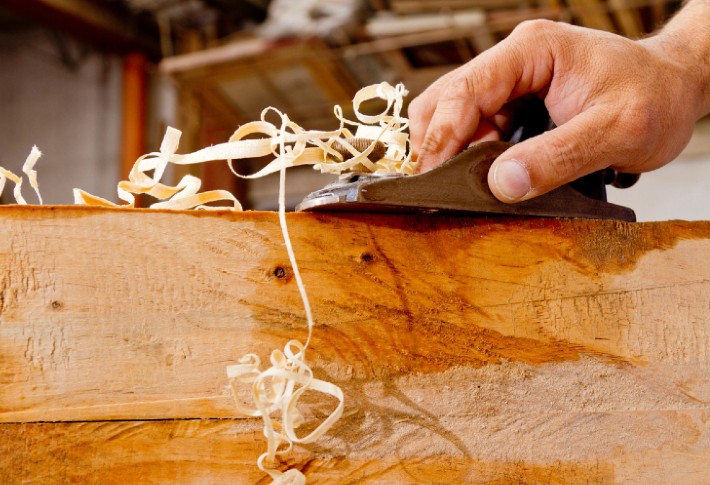 Create Clean Slices using the Best Low Angle Block Planes
Block planes are one of the most essential tools in a carpenter or furniture maker’s toolbox. They are used to literally and practically smoothen out rough edges. Rough edges in… 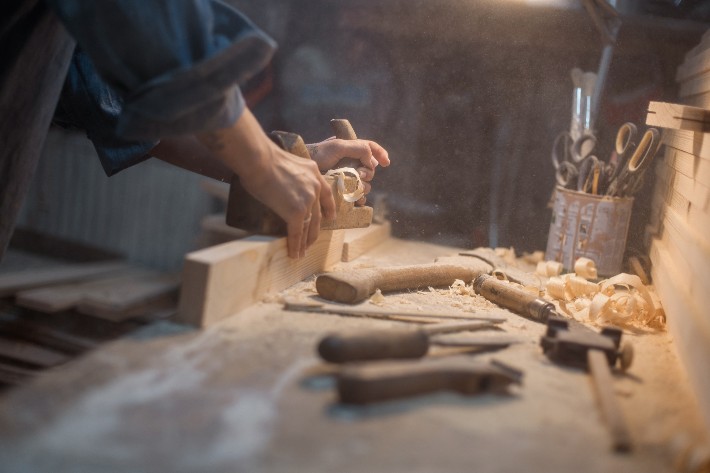 The Best Wood Planer To Complete Your Woodshop
Whether you're a professional working with wood crafting for years or love to get involved in DIY woodworks projects at home, you would have required a sturdy wood planer at…